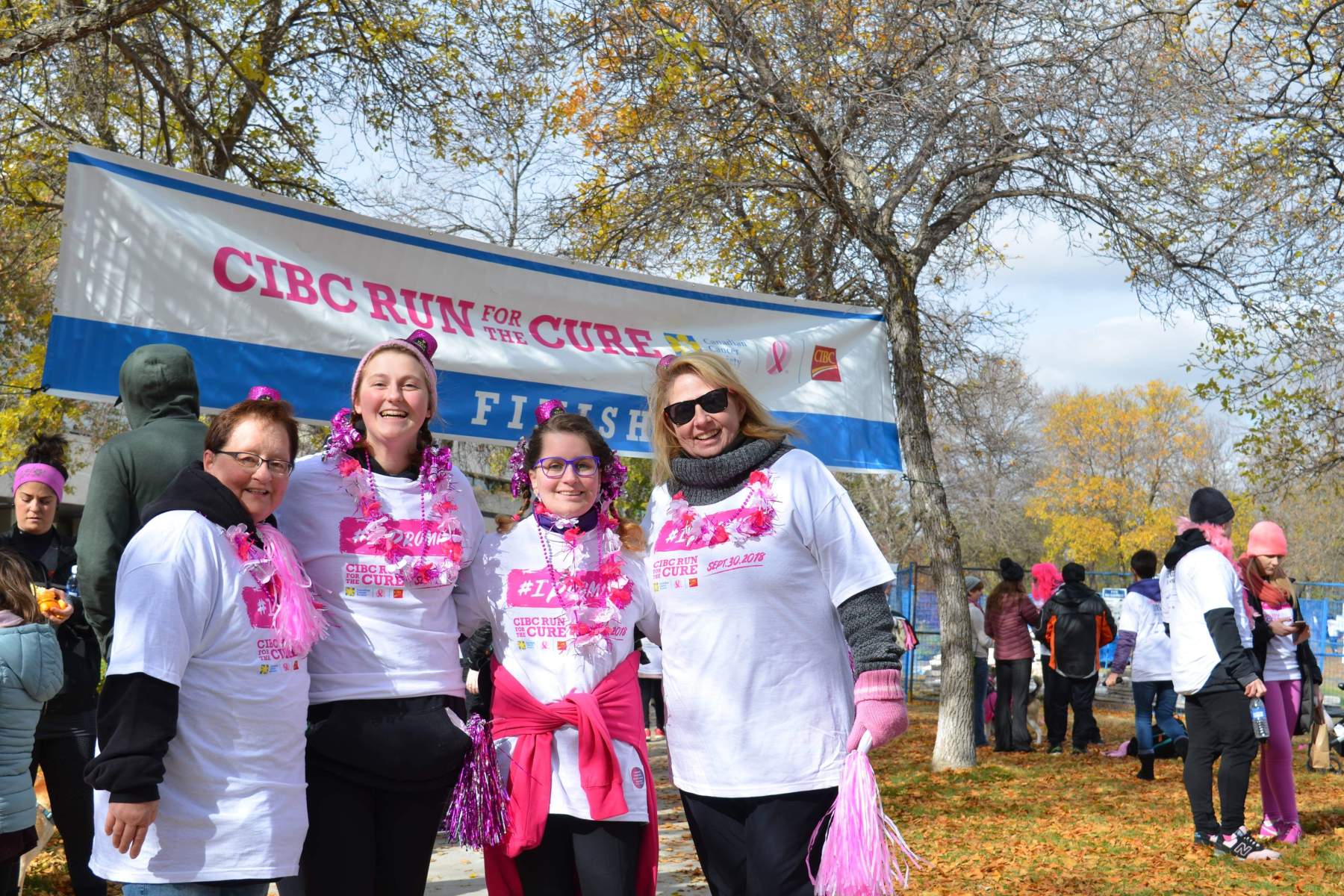 On Sunday, September 30, 2018 I did the 5K Run/Walk For The Cure Marathon for Breast Cancer. In August I randomly saw an advertisement for the run, pop up on my Facebook news feed and I told my mom that we should do it, and she said okay. It was just going to be the two of us. But I emailed our friend Lori and unrealistically asked her if she would like to do the run with us. I say unrealistically because she lives in Leduc which is an 8 hour drive to Regina. I wanted Lori to know she was invited even though/if she couldn’t come. She ended up emailing me back a few days later that the hotel was booked and she was coming, but that it was going to be a surprise for my mom. I also messaged my friend Emma who lives in Sylvan Lake which is 10 hours away if she wanted to come as well, and drive down with Lori and Ray. She said yes as well. Plans were working out great!! A week before Lori, Ray and Emma were to come down, Saskatchewan had a huge snow storm and I was starting to feel bad about inviting them to come because travel wasn’t recommended on the roads. But I knew the weather could change in a week, I knew God could change the weather within a week to make good driving conditions. It ended up being the best weekend we could have asked for!! Now, you’re probably wondering how we surprised my mom. Lori and I were texting while they were driving on the Saturday. Lori wanted my mom to be out of the house, but not too soon, so she wanted me to stall. My mom ended up doing a good job of stalling herself. To stall, I ended up pulling out a water pick that I had bought in Minot the week before, that I had no idea how to use. I told my mom we were going with my car because that’s what I wanted to do. Then when I was waiting for my mom, my dad told me he needed to re-tork my tires, which was another good way to stall. We ended up going to Victoria Square Mall. We were in Dollar Tree and spent so much time in there. I went from one aisle to the next, saying lets buy this, lets buy that. By this time Lori was in the mall and then next place we were going was Safeway. I kept looking around but didn’t see anyone. My mom and I went down aisle 7 and I had been looking for some cookies, and there was an employee in that aisle so my mom asked her if she had the cookies and I fully knew that Safeway didn’t carry the cookies, but anything to stall. The lady had no idea what we are taking about. So my mom gets out her phone and starts looking for a picture. And I’m still looking for Lori and Ray and Emma. And behold, here comes a lady in a safety vest walking down the aisle with a cart. She gets closer to my mom and keeps bumping into her and my mom doesn’t realize it’s Lori until Lori gets in her face and says hi. 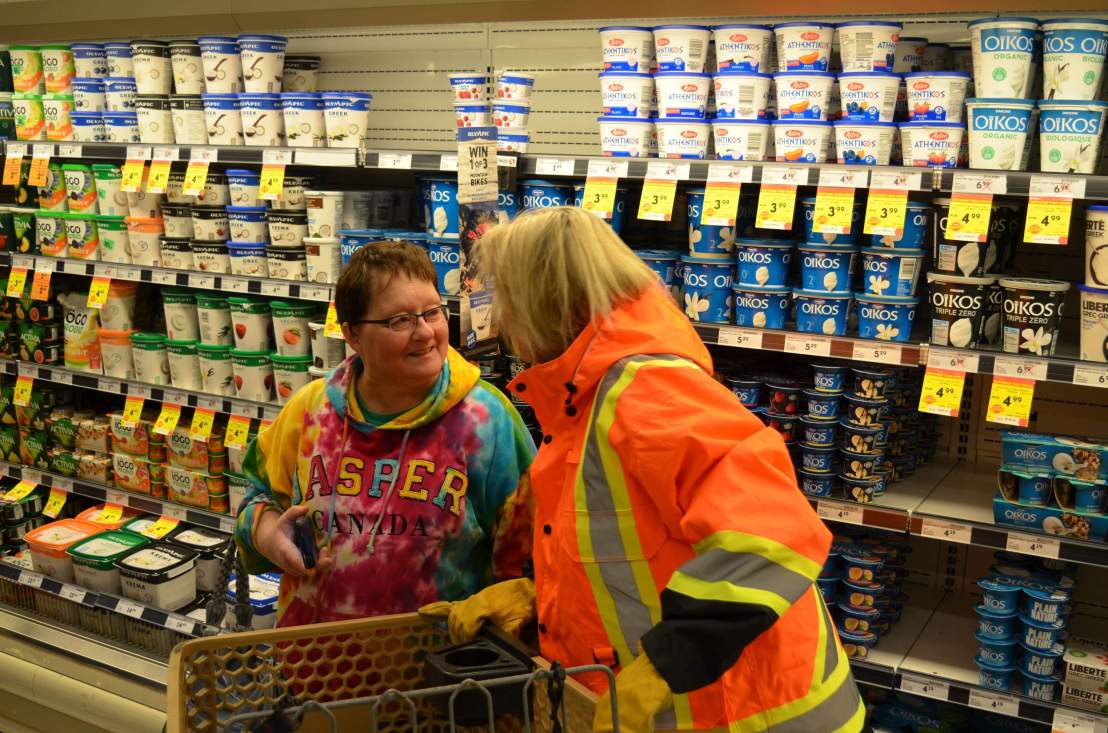 My mom was completely surprised!! One of my mom’s first questions was where are you staying. So I told her Lori and Ray and staying in a hotel, and Emma is staying at Charlene’s house. And my mom said Emma’s here!? And then Emma came around the corner. (Emma ended up staying at my house) Then, the Safeway employee comes back and asked my mom if she found the picture on her phone yet, and I told her that I knew she didn’t have the cookies, but we needed to ask just to make a plan work. We then went back to my house and since my dad didn’t know anyone was coming either, he had dug all of the potatoes and carrots, so all 6 of us helped pick up the potatoes and carrots.

Here are some pictures from the Marathon. Many people have asked how it went. We had a blast!! We were some of the first people to cross the start line and some of the last people to cross the finish line. As we went along each kilometer felt like it was getting longer and longer. We were walking and my mom said that she thinks we missed the 3km mark because sometimes there were 2 paths we could choose. I agreed with her that we missed it. About 5-10 minutes later we came up to a sign and I thought it was going to say 4km but it was the 3km sign.

Lori brought lots of decorations to decorate ourselves with for the run. The socks, the hats, the beads, everything. 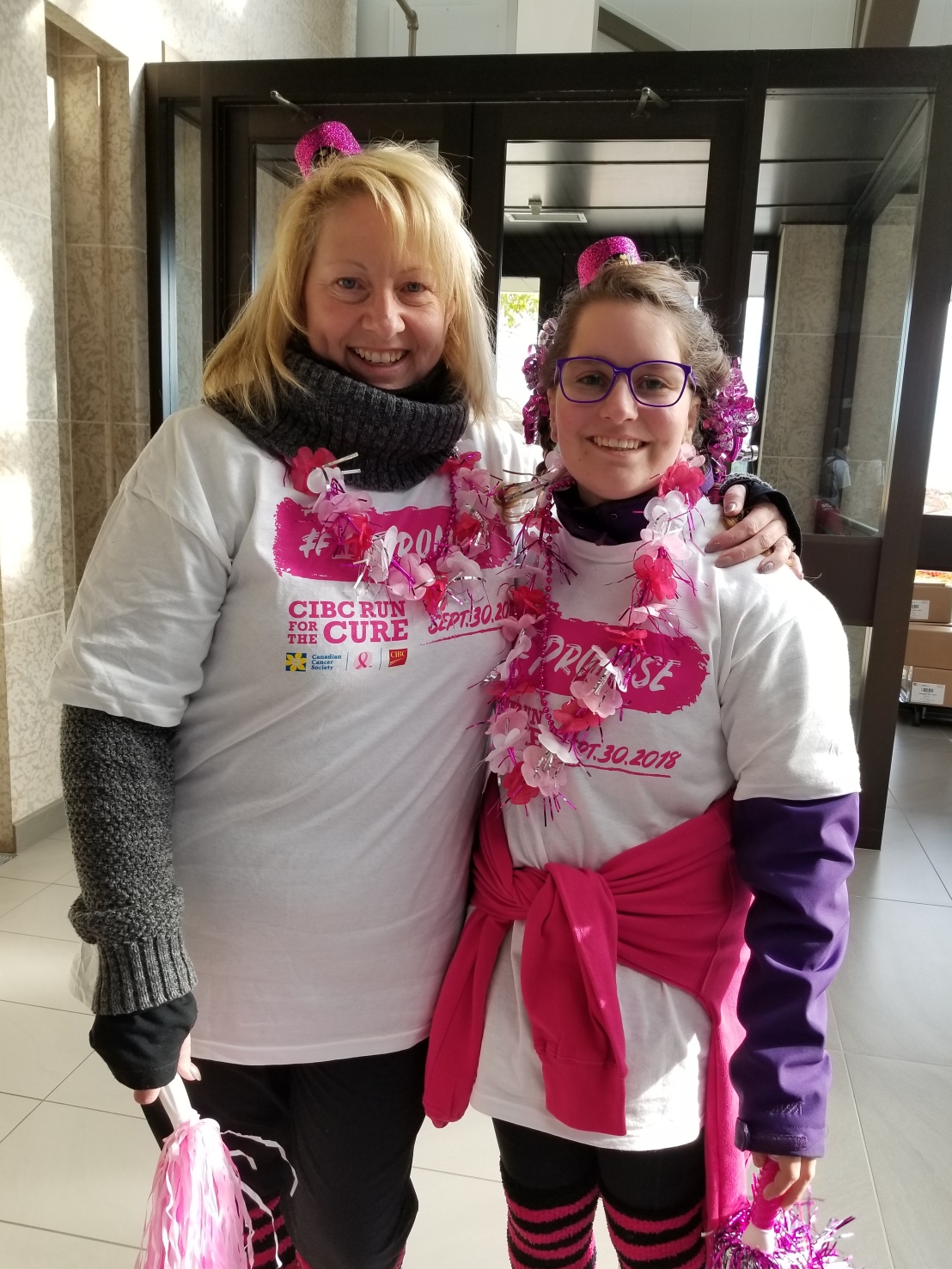 My mom and I

The four of us getting ready to start. 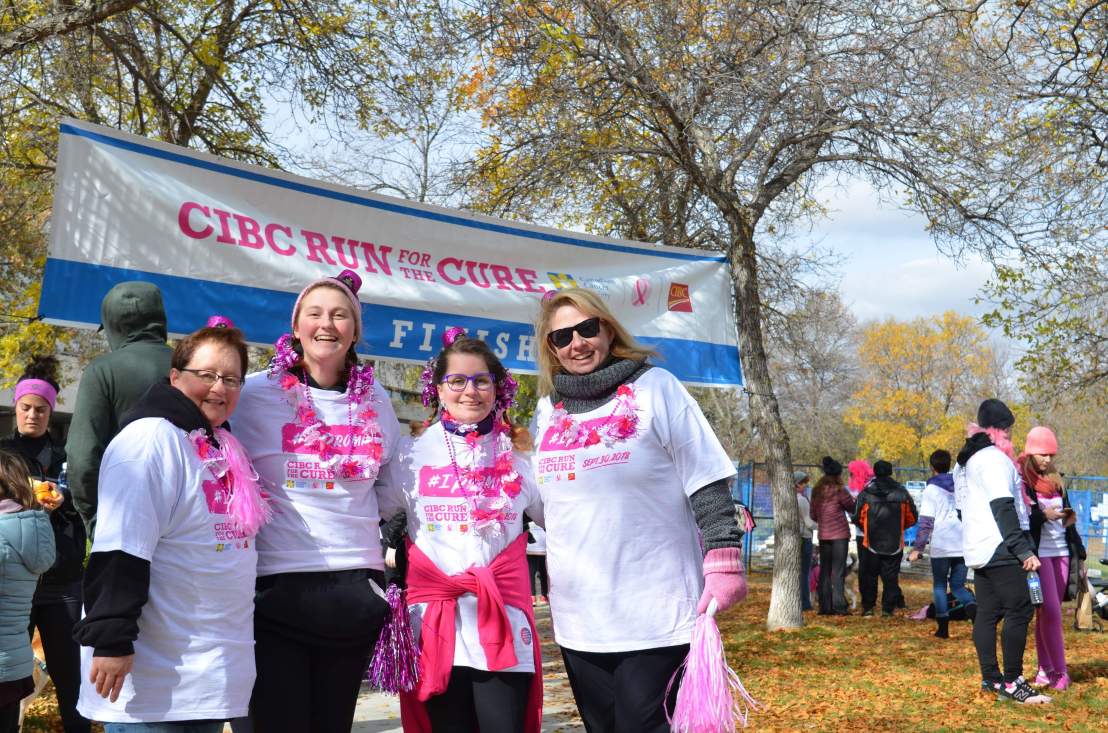 The four of us at the finish line. 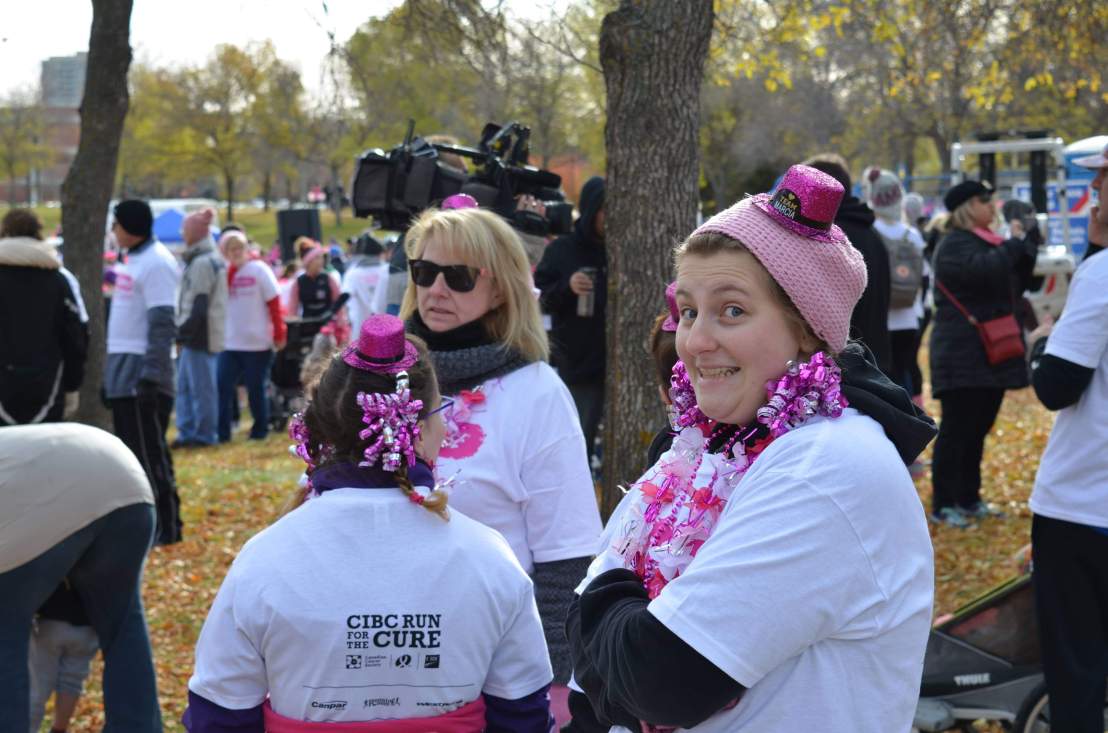 Here you can see what the hats say.

The back of our shirts say who we are running for. We even made it on Global News! 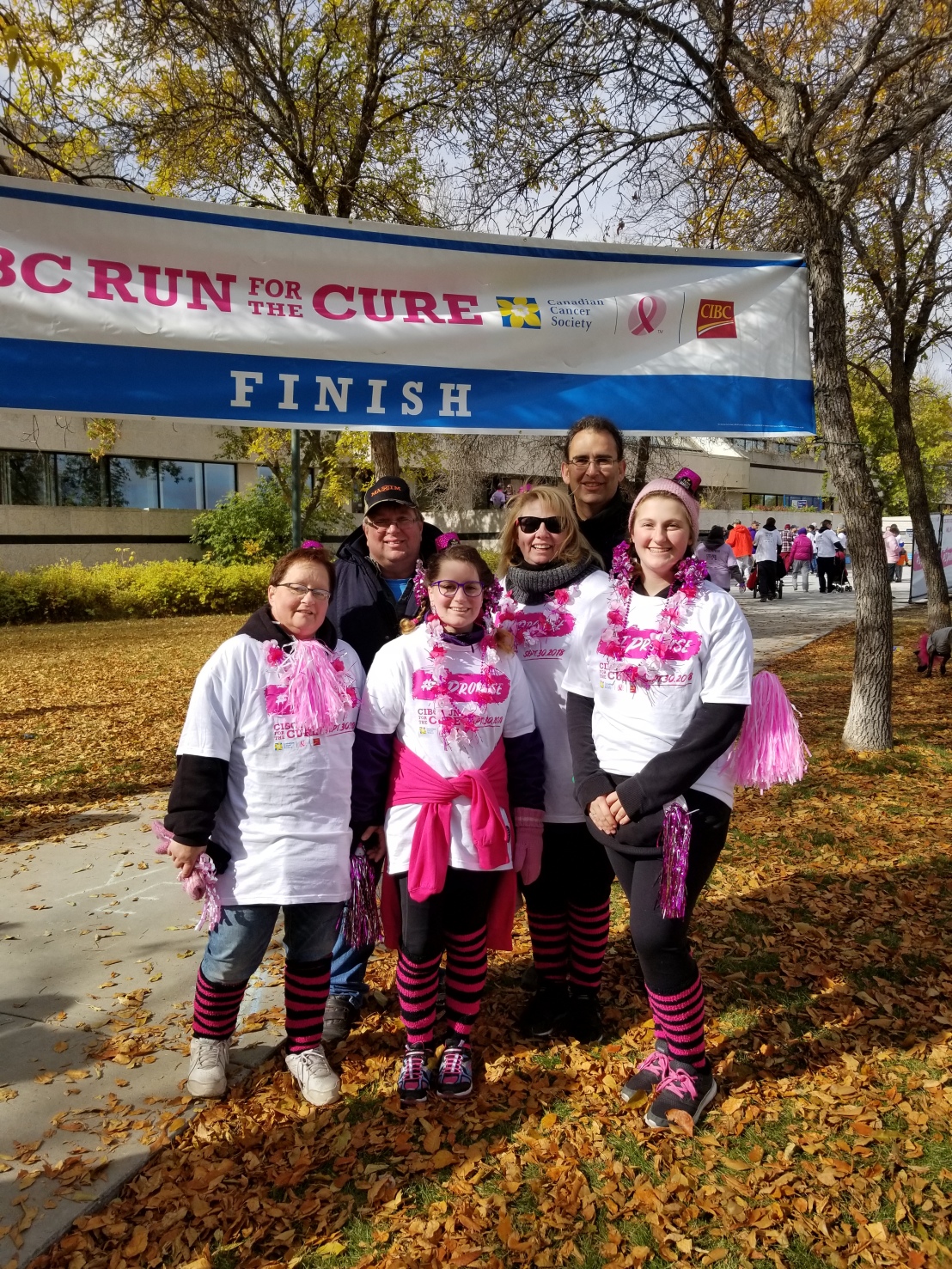 When Lori and Ray got home in Leduc, it started snowing where they were. And when Emma got home in Sylvan Lake, it started showing where she was. And here in Regina, it snowed for pretty much the whole week after the marathon. The weather and roads could not have been anymore perfect for the weekend!

The weekend was so much fun, I hope to do something similar again soon!

← Acceptance
Do You Have Room? →